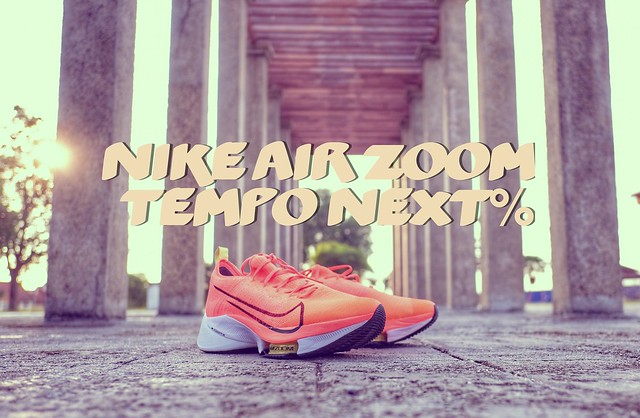 Here we are, yet another polarizing release from Nike. The other one, of course was the ZoomX Invincible which I reviewed here. I purchased both at the same time through a discount code from Nike and while I’ve sold off the Invincible due to its limited use case, the Air Zoom Tempo Next% (quite a mouthful, eh?) or simply Tempo in this review, remains very much in active use. In fact, the Tempo has been a staple in nearly all of my marathon-pace workouts.

As usual, a person’s wear experience depends in part on the runner’s build and paces, so here are some of my current stats:

With the Tempo, Nike threw nearly all of their current and commercially available tech into it – ZoomX, React, visible Zoom Air unit, full-length composite plate. But do they work? We will get to that. 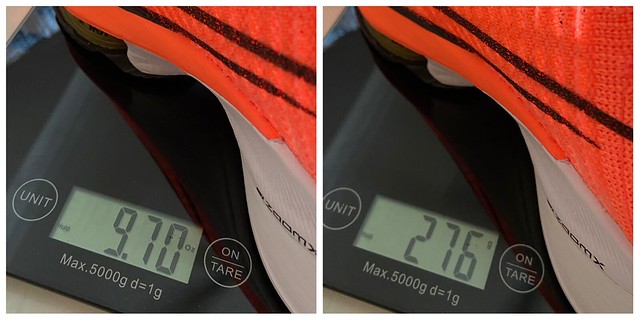 At 9.7oz, the Tempo isn’t exactly featherweight. It would be similar in weight to the Asics Novablast (reviewed here) but 0.3oz heavier than Hoka Clifton 8 and Puma Deviate Nitro, full ounce heavier than the Saucony Endorphin Speed, and likewise heavier than the 3 Hoka models such as the Mach 4, Rincon 2, and Carbon X 2, and New Balance Rebel v2. 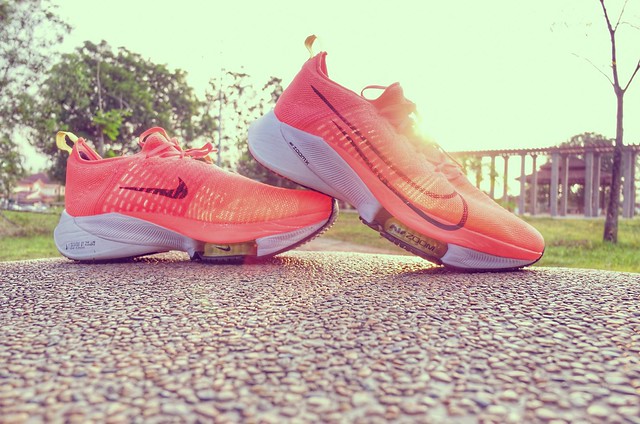 Upper
Any initial design misgivings will be offset by the Tempo’s well-engineered Flyknit upper, reinforced at the stress-points around the heel, eyelet chain and toes. The material is stretchable but only where needed such as the tongue, so while it may be a little hard to slide your foot in the first time around, it’s really not uncomfortable at all. Ingress and egress are made easier with the presence of a pull-tab. There’s an internal midfoot wrap for added comfort and just-enough protection. There’s no padding other than the black internal strips around the collar. I like the use of asymmetrical lacing which alleviate pressure off the top of the foot, a very important consideration since there’s literally no padding on the tongue. 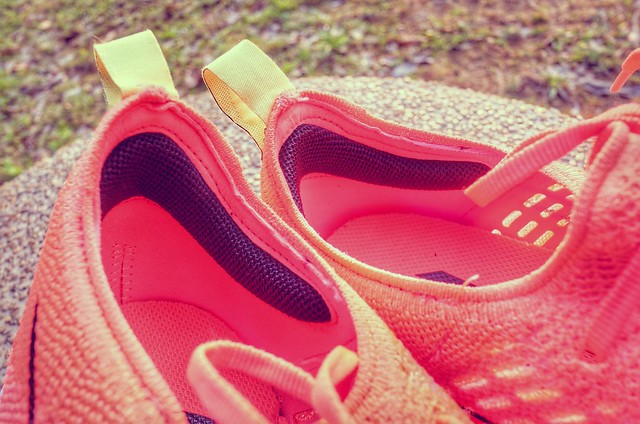 It’s evident from the photos that the shoe is superbly ventilated just like the Alphafly – super breathable and quick-drying. I squeeze out cups of sweat after every run, yet the Tempo’s upper would just be a little moist post-run. I’ve worn the Tempo through puddles and it took just a day to completely dry out. The semi-adhesive sockliner is not your usual Ortholite but feels like Pebax. You can bet that it adds to the overall comfort of the shoe. 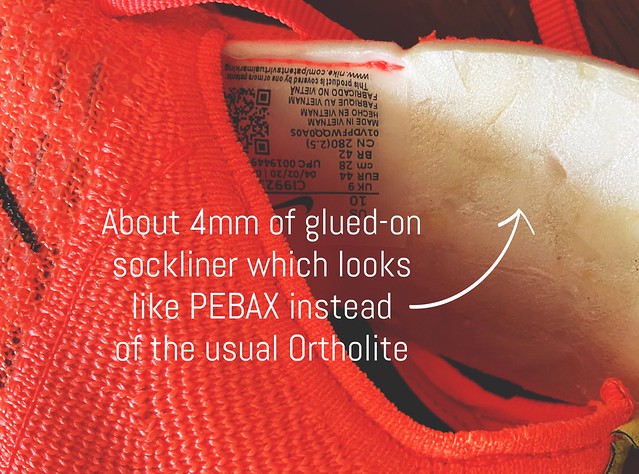 Midsole
Mad science or let’s-chuck-everything-in approach? Much of the midsole is made up of the super bouncy, fun but fragile ZoomX. 2 large Zoom Air pods are positioned right at the toe-off area to provide a propulsive push-off. The midfoot area is heavily sculpted to save some weight. And yes, there’s a composite plate in there too. Youtuber Seth DeMoor did a tear-down of the shoe here if you’d like to see the components (fast-forward to the 12th minute):

Per Runningwarehouse, the Tempo has a 45mm/35mm stack height and those are astonishing numbers since the heel is 5mm more than World Athletics’ race-legal specs. I don’t think anyone is going to lose any sleep over the Tempo not meeting that guideline, though. It is, after all, positioned as a up-tempo trainer simply because there are better choices for racing out there. If you’re curious which shoes meet the WA criteria, download the list here (link from WA site). 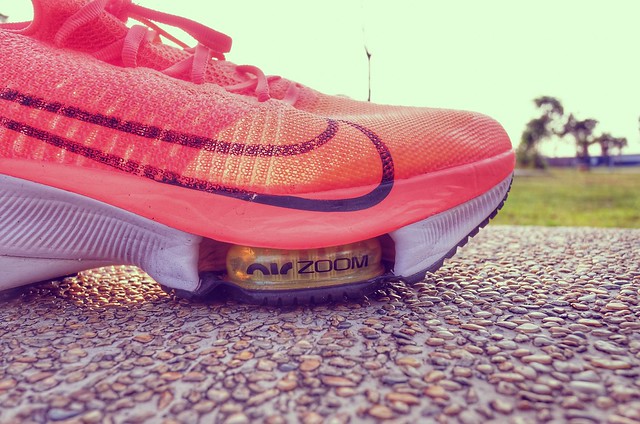 A large denser React wedge shores up the heel impact area, not only protecting the ZoomX above it but also provides some stability to the otherwise inherently soft and unstable ZoomX. 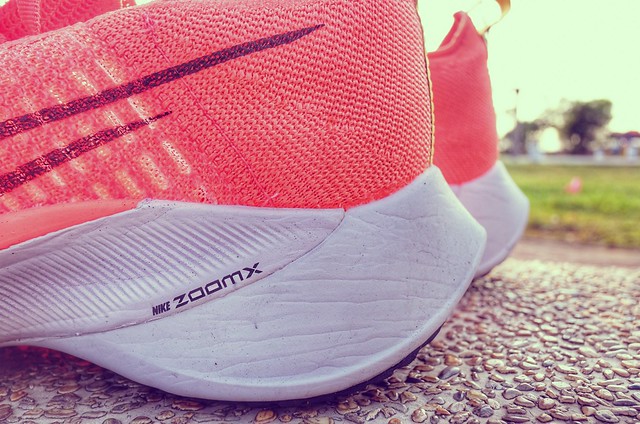 Outsole
For a fast shoe, there are certainly plenty of rubber coverage, concentrated mostly in the forefoot area. There are grooves and sculpting made to the midsole. It’s obvious just looking at the outsole threads where the Zoom Air pods are located.  One may think the seemingly excessive use of rubber isn’t required and you’d be forgiven for that, but I think it’s to provide a more robust layer of protection for the pods. 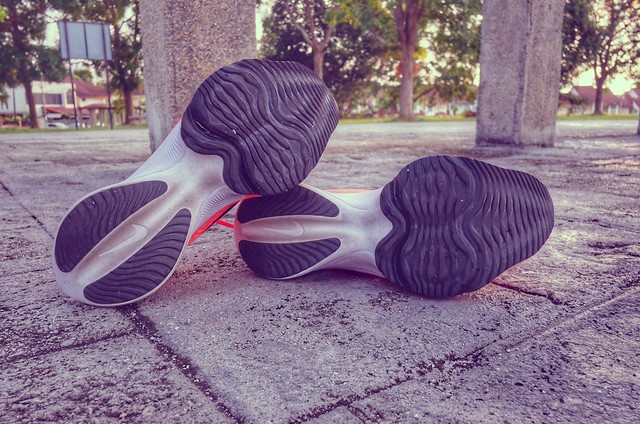 Fit
The Tempo fits true to size. It’s surprisingly roomy in the forefoot, with a sock-like snug midfoot and heel. The upper is light and see-through. As mentioned earlier, the pull tab really helps in getting in and out of the shoe. I would’ve like a little padding on the tongue to alleviate the lace pressure. I cinch the laces tight in the Tempo for a secure fit at quicker paces, so having a thin layer of padding would be nice. There were some initial rubbing on the left shoe at the Achilles and I was fully prepared to snip that part off if it happened again. Strangely, and happily, the issue went away after the 3rd run proof that sometimes you’ve got to show your shoes some tough love. 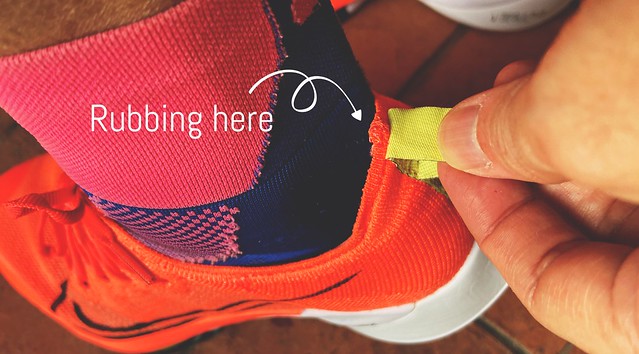 Ride
Like the Alphafly and to a lesser extent Invincible, the Tempo is superbly bouncy. The shoe’s incredible stack height is immediately apparent the moment you take your first steps and while I don’t have stability needs, I can see how some runners may find the ride a bit too wobbly. There are no raised sidewalls to stabilize your footstrike, so runners with special needs should take heed. 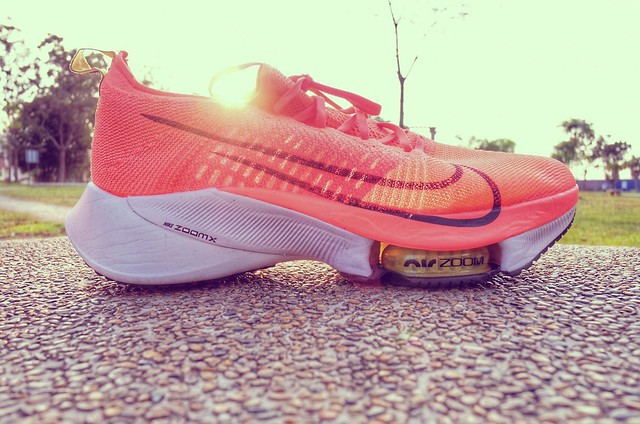 I’ve mentioned in previous reviews that React midsole does require a bit of breaking in and in the case of Tempo, it happened much sooner. In fact, the ride was significantly smoother after 40km making the heel to toe transition less disjointed. At slower paces, easy-recovery runs for example, the shoe still feels a bit awkward, accentuating the different materials (React-ZoomX-Plate-Air Pods) used.

Dial it up to threshold and tempo paces and you’ll find that the Tempo simply shines – the shoe’s bounce and responsiveness seemingly offsetting it’s weight penalty. If you’ve watch Seth’s video above, you’d have seen how pliable the composite plate it. My guess is that it’s there simply to provide a platform for the Air pods to compress into at each footstrike. Without the plate, the pods would simply push right into the soft ZoomX and over time be partially stuck in it.

In case you’re wondering, I’d like to confirm that the heel is indeed softer and bouncier than the forefoot. The Air pods are noticeably felt on toe-off, certainly firmer and louder on impact. The Tempo is, literally, a loud shoe. Folks knew I was approaching from as far as 100 metres away with the clomping sounds the shoe was making. It was initially pretty unnerving for me since I hate to attract attention to myself. I’ve nicknamed the Tempo my Dragon Boat shoes because the noise they make are like the drums on a Dragon Boat, keeping tempo (see what I did there?😏). 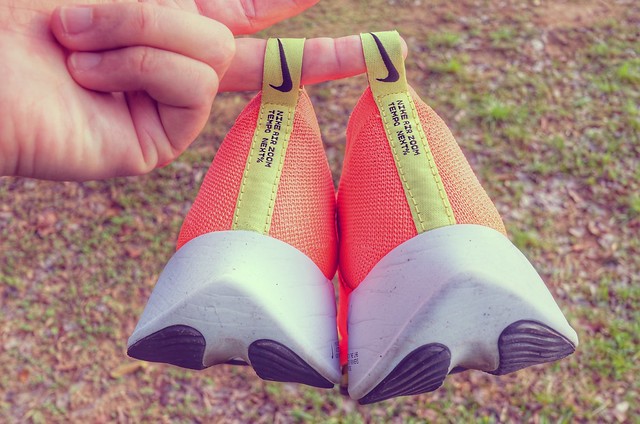 The Tempo is not exactly a long run shoe although I’ve taken them up to 20K. It gets a little uncomfortable in the forefoot after that mainly due to the sensation of the 2 pods. I’m keen to take them further post-GCM21, so do look out for my updates on my Instagram feed.

There were reports of quality issues ranging from burst Air Zoom pods, shoddy workmanship in the midsole (where ZoomX is glued to React), to the shredded outsole just behind the pods’ flex point. Thankfully, none of the reported issues are present in mine so far. In fact, they look pretty darn durable to me with minimal wear on the outsole and losing none of the bounce. Traction is on point as well. 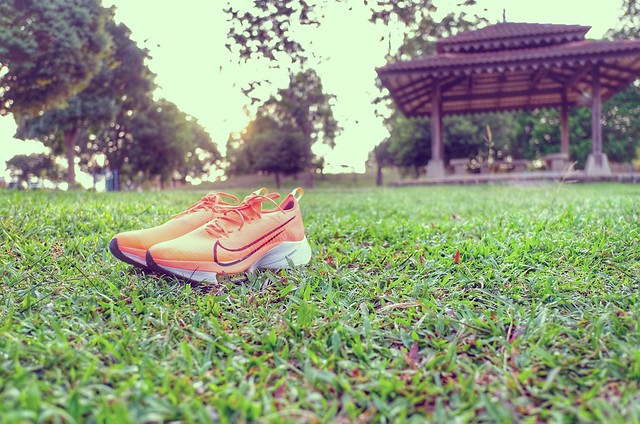 The Tempo is a premium up-tempo trainer that’ll work best for those without any special stability needs. At full retail, it’ll set you back a princely RM829, although selected colourways were available at a discounted RM579 recently. Its use case is somewhat limited and that’s where it loses out. There are certainly more versatile shoes that won’t cost as much out there – NB Rebel v2 (already one of 2021’s best), Puma Liberate Nitro, Saucony Endorphin Speed – just to name 3. It remains to be seen if Nike continues the Tempo so if you’re intrigued, keep an eye out for the discounts.

Disclosures: I purchased the Nike Air Zoom Tempo NEXT% with my own money, so no obligations are due to any parties whatsoever!