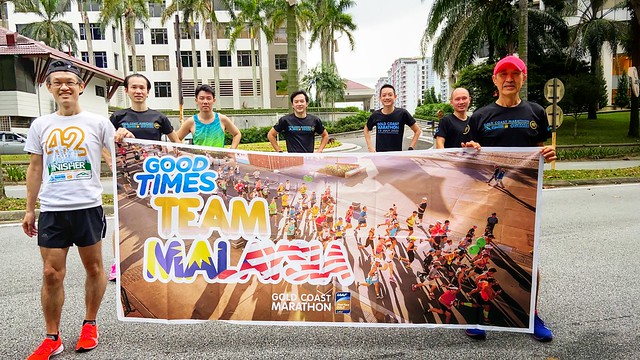 Note: This was not a race. Realistically, there’s not going to be any for the rest of the year. Even so, I’m putting this under the 2020 race blog menu to remind myself of the type of year this has been.

With events still on hold, small and large organizations are putting up virtual races in hopes of keeping the running community engaged.

During normal times, I give Virtual Runs (VR), especially the ones organised here, a wide berth. Not to sound elitist, I’ve always thought there’s very little work that needed to be done by the organisers to put up the event and for the runners, too generous a time window to complete their 10Ks. The reported results can be fabricated, participants don’t really know who the people behind the VRs are and what’s really the point of paying for a medal and tee to participate in a 5K and 10K virtual event?

However, given the world we live in today, there’s a place for VRs. The ones that charge nothing and which everyone can participate as a community, keeping the spirit of running going. The ones that go beyond just putting up a registration page, t-shirt design and completion medals. And that’s essentially what the NN Worldwide Team Relay (happening this weekend) and July’s Village Roadshow Theme Parks Gold Coast Virtual Marathon (see previous post) are all about.

We’re, of course, familiar with NN through the exploits of and being the sponsors of Eliud Kipchoge, Geoffrey Kamworor, and Kenenisa Bekele. Leveraging on their stable of world-class runners, the Dutch financial services company have put up a free easy-to-join marathon relay for everyone. All the runners need to do is to rally their mates, form a team of 4 where each will cover 10.5km. The system tabulates the feed from Strava and puts them on the event leaderboard. The GCM crew put together 2 teams and ran the distance yesterday, collectively clocking 3:35.37. It was the hardest effort I’d run in a long time, in fact since January. I averaged 4:25-ish until the 6K mark when everything just went south, just managing to sneak in at a 4:49 average pace. But it was all in good fun and a necessary check on where I stand. That’s what a diet of easy-running 55-60km weeks do to you.

While I should have no problems completing the 3 distances as part of the Village Roadshow Theme Parks Gold Coast Virtual Marathon next month, I harbour some serious apprehension on how to complete the final marathon distance with less than 60 days to go!

Entries for the Village Roadshow Theme Parks Gold Coast Virtual Marathon are open. It’s a completely free to participate even where you can sign up for individual category or distance, or as a bundle of distances.  Run your “races” any time between July 1 to 31. To register and learn how to sync your run data (3 options regardless of what devices you use), go to the official website. 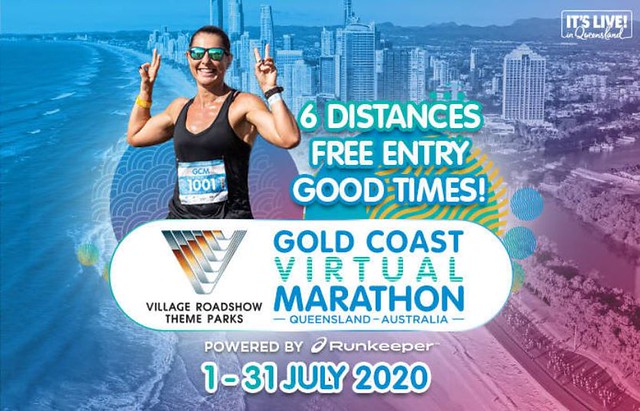 A typical year-end of a racing calendar is always a busy period. There are always a chockful of races with the large ones like the Penang Bridge, Macau, and Standard Chartered Singapore Marathons already locking in the big crowds the past few months. Then there is the popular but niche event like the Malakoff Powerman Duathlon. Powerman Malaysia is the only a qualifying race in Asia for Powerman Zofingen, the World Cup Finals in Zofingen Switzerland, the most prestigious race in the duathlon world circuit. Understandably, this makes it very popular for athletes in this region.

Before registering under the Team Relay (A 64km bike sandwiched between two 11.4km runs) I briefly toyed with going for the Sprint Event (5.7km run, followed by a 32km bike and a subsequent 5.7km run). However possessing neither a biking acumen and time/resources to familiarize myself with riding, I chose the safer path by tackling both the 11km running legs in the relay. That didn’t mean that I couldn’t ogle at the line-up of bikes at the Marriott Hotel during the race pack collection. There’s something about the relationship about Man and Machine.

My plan going into the race was to take the running legs as 2 tempo sessions. I knew it was going to be tough due to the “break” in between the runs. My team-mate, MC, reckoned that he’ll be able to complete the 64km ride in 2.5 hours, which meant that I’d have a very long time to wait. The body would’ve cooled down to a complete rest state by then and more importantly we’re going to be roasted by the sun, what with temps hitting the mid 30s the last few weeks. Our finishing times are not as important as we’re given 5.5 hours to finish and we’re there for the fun and the experience. Our team name “I Bike, You Run” seemed to reflect our casual approach but I still wanted to put in a good performance as part of my marathon tune-up.

Come race morning, I was surprised with how much I’d packed into my duffel and sling bags. And that’s without me biking (or in the case of a triathlon, swimming!). Imagine how much more logistical planning one needs in a multi-sport event! Running is as complicated as I can tolerate for now. A quick breakfast at McD and we were off to the race site. Cars were already streaming in and we found a quiet section to prep up. The sight of cyclists doing their thing can be intimidating. I basically had nothing to do (see, running’s simple!) except to sip on my chia seed-honey mix and sorting out what I need to put in the transition bag. The cyclists were busy fixing their wheels, inflating their tires and spinning around the area. That done, it was time for MC to check his bike in. I followed a little while later when the call went out for the participants to gather up. Lots of familiar faces and the carnival like atmosphere was infectious. Adele from Quick Release, the organizer, did a great job as the emcee as usual. Put a few hundred thousand bucks worth of gear, guys and girls in tight apparels and music together and I can see why multi-sports can be addictive. Of course, there were bound to be lots of bravura-talking going on but generally there was an air of camaraderie and lots of camwhoring around.

Next was some warming up and I did the usual striding, pickups and dynamic stretching which was done a few minutes before the full distance athletes were let off. Next flagoff would be the team relay followed by the sprint. I was positioned in the 5th row at the start, and so had the race leaders in my sights within 100 meters ahead. But that gap would increase with every step covered. It would be fast and furious and I kept the pace likewise. The pace took me past a number of runners from the Individual category.

Traffic control was excellent and the drink stations more than adequately stocked with water and Gatorade. I didn’t grab any fluids on my first lap of 5.4K (26:59 split). I’ve no problems at all with the nice course and except for a 300m climb right after the 4K marker, we found ourselves running either on flat terrain or downhill.

The second 5.4K loop (actually a little longer) was just the same thing. No gels taken so far and feeling great, so I pushed a little towards the transition. Upon crossing the timing mat, I messed up a bit and headed into the wrong chute! Realizing the error, I slid back into the correct one and sprinted towards MC, strapped on the chip to his ankle and watched him head off. My run time was 56:28 (11th quickest time for this segment), several seconds lost to the boo-boo.

After that, there was really nothing to do except to move around the race site, catching up with friends. Chanced upon Yann Khai and had a nice chat with her – she ran an excellent race and appears to be getting back to her former self after some injuries. The weather was just fantastic. Heavy clouds ensuring the scorching sun would not be making an appearance. It even started drizzling!

But the longer I waited, the more the body cooled down. The drizzled eased up and to my horror, the skies cleared exposing the sun. I’d be getting my tan then! At the 2-hour mark, I headed back to the transition area and sought some relief in whatever little shade there was, while sipping on my chia-honey mix. Slightly more than 30 minutes later, MC came back (after suffering some quads and hamstring cramps along the way) and I grabbed the chip off him and sprinted off to wrap things up. It was getting hot and so I had my cap on.

But almost immediately, I was hit by sidestiches which I’ve not gotten in awhile. I’ve rested a little too long and neglected to warm-up *face palm*. No way I was going to be going as quickly as the first leg. Things started to go downhill from there and though we were baked under the sun, we had the protection of the trees along one long stretch of the course. Walked a little a few times and because of the earlier drizzle, I’d took off my socks prior to starting the run. The GOrun Ride while very comfortable rubbed several areas of both my feet and blisters formed. That still wasn’t as bad as the heat. I was just glad to finish in 1:05 (13th quickest time for this segment, 29:48 for the first loop).

All in all, it was a very enjoyable outing. I think the team did OK and missed the initial modest target just by a few minutes. With experience under our belts we can only improve. I’m grateful that we were largely spared the harsh weather that only came in effect for a short period of time. Looking at the thousands of photos taken by the many photographers (many thanks to them!) that morning, I was even more amazed some of the participants who biked in foldies and MTBs. Also the always inspiring Sabki. How about the 2 rotund kids among a few pre-teens, who finished ahead of many adults in the Sprint category?

Will I be returning for the 2013 edition? You bet! Great organization by Melody and team, nice atmosphere and challenging disciplines. In which category I’ll be back is another question that I’ll address at a later stage 😉